This year, our church used the “SonWest Roundup” VBC curriculum from GospelLight. The guy who usually paints the VBC backdrops had sprained his wrist, so I got asked to do it. I came up with some ideas early on, but then procrastinated until just a couple weeks before to actually take the time to go and paint.

The illustration style I was going for came from the town graphics in the curriculum, but I wanted to make them less pastel and more earthy, but still fun and quirky. In the weeks leading up, I kept visiting Ace Hardware’s “oops” paint area, but they just had really odd colors. The day before I had planned to go paint, I found awesome shades of light blue, a warm yellow, dark brown, and beige — exactly the shades I was thinking of using!

I started with the sky: 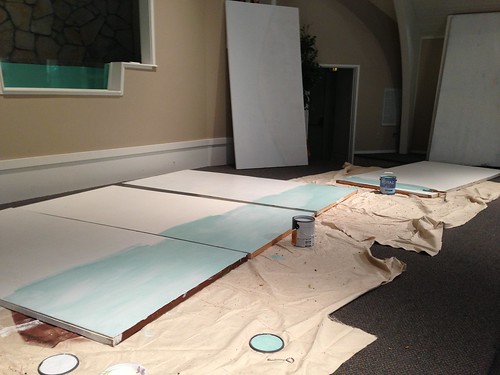 Then, I used painters’ tape to make straight edges for some of the buildings (I freehanded the curves). 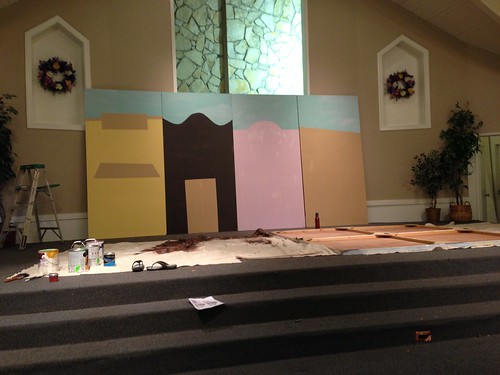 Steve brought the boys over to have lunch with me. They brought their painting pajamas to “help” me paint, which meant my productivity went down 90%. 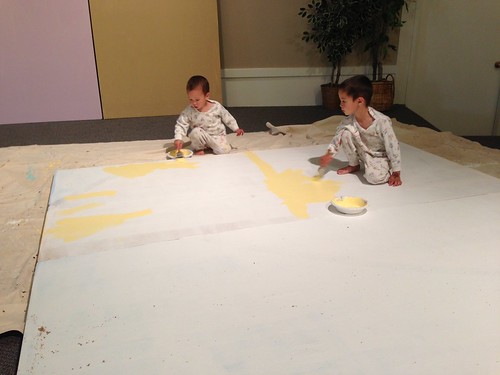 After they left, I was able to get more of the details done: 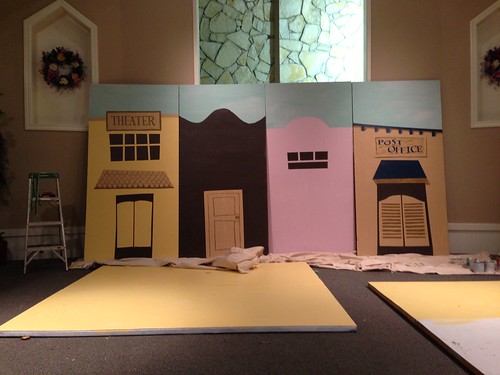 The next day, I finished up the details. I was really happy with the shadows on the Theater. 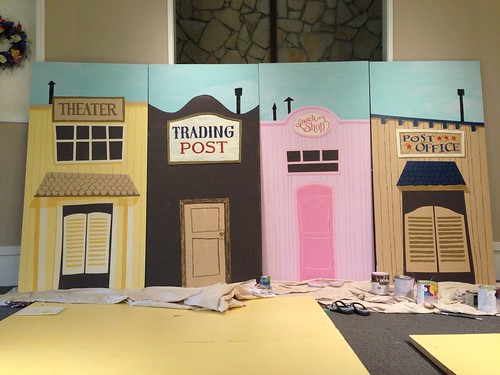 The yellow panels that the boys had helped me paint got put up on the side of the stage: 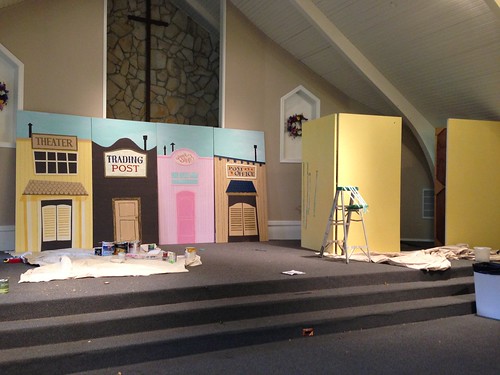 And I painted them more to turn it into a life-size sheriff’s office, complete with foam-board sign up top and foam-board swinging doors. 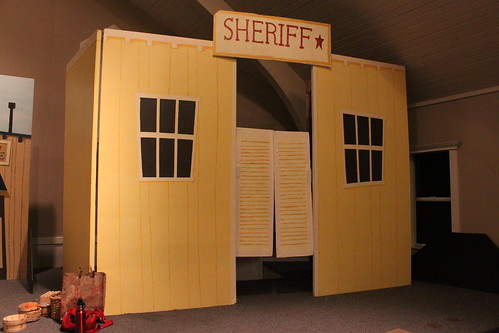 My initial duct tape and hinges job only lasted one night before falling off, so they had to get screwed on. 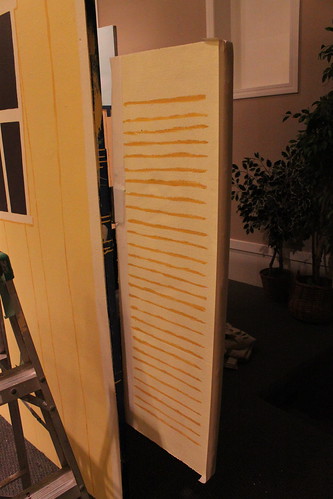 Finally, I hit up a thrift store and found smaller-sized baskets, mini crates, and even a mini wine barrel half to put outside the trading post. 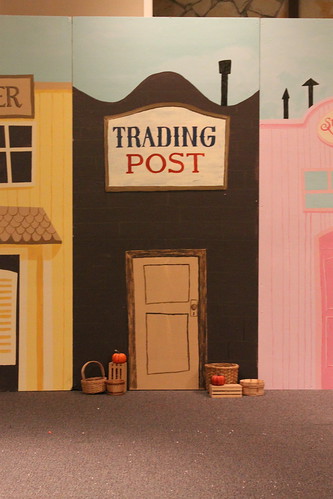 One challenge I ran into was that I started running out of painter’s tape, which I was using to help mask the windows — the shapes, “panes,” and trim. I ended up reusing tape over and over again. The original paint was green, and you can see how many layers of paint I have below! 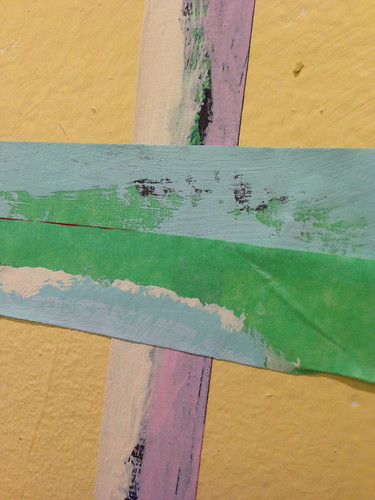 The rest of the team came in and did their magic. Other volunteers created the stagecoach image; signs were hung out; fences and hay bales added; and lots of butcher-paper silhouettes were taped to the walls. Here’s what the final room looked like: 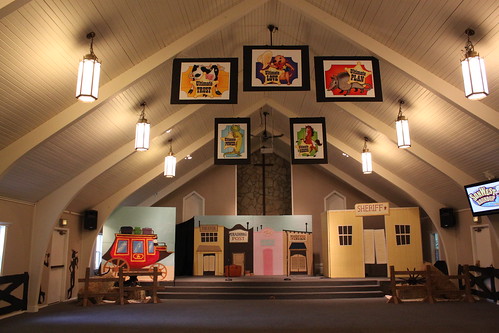 The entryway had a life-sized wine barrel and our chicken-wire mannequin in a rocking chair. (The mannequin shows up in the decorations somewhere every year, and never fails to creep us out when we’re working on decor in the late night.) 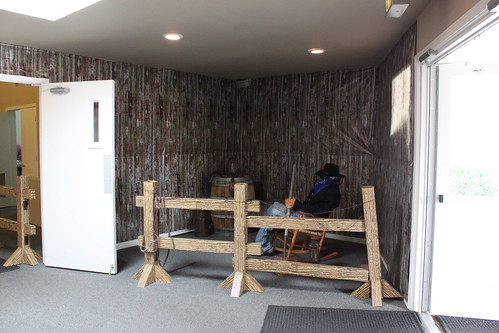 The week of VBC was a blast for all the volunteers and kids. The volunteers all dressed up with the western theme – good thing cowboy boots are “in” right now! 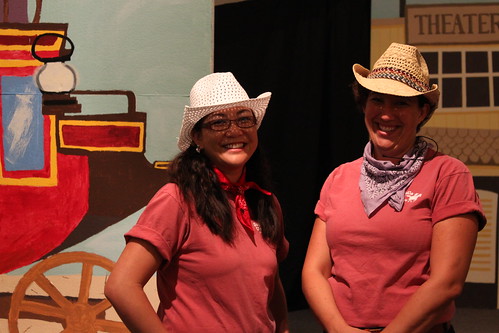 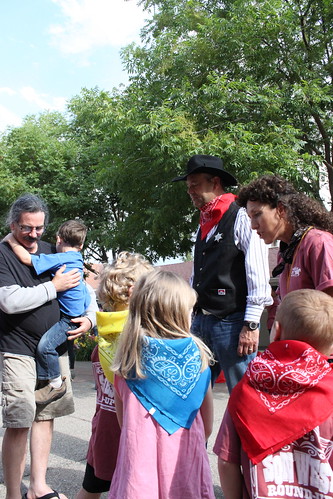 The cooking team made fun snacks every day. The first day, they made bagel “wagon wheels.” 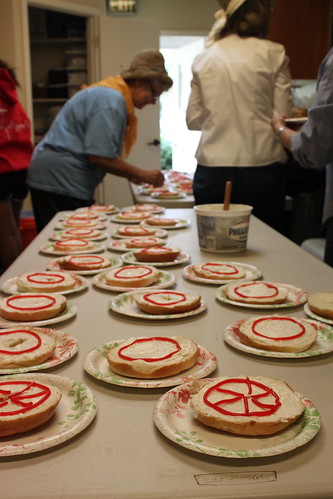 A few other places on the campus were decorated, too — specifically, the “bible barn.” I loved that they had succulents and plants brought in for the outside! 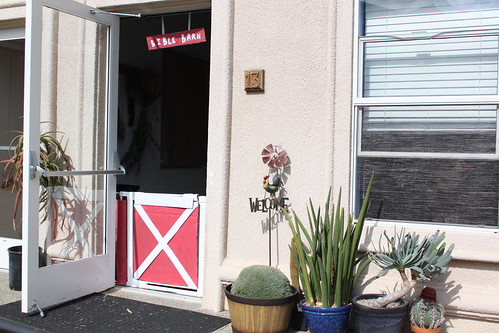 The inside had hay bales for seating (I cringed when I looked at the floor and thought about clean-up), play horses corralled in a corner, and a wooden fence as a backdrop. 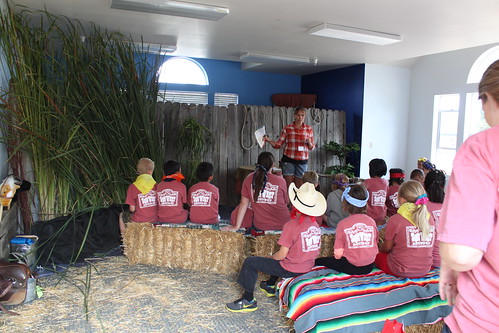 A good time was had by all!

Another year, another New Year’s Eve bash! This year’s theme was a beach theme. We had a lot of decorations to re-use from the summer’s vacation Bible camp, which also was a beach theme, but we still did plenty of work to put everything together!

Here’s what the stage looked like – a beach scene, complete with a dock coming off the stage (our church’s handyman built it!):

The back four panels were reused from vacation Bible camp. They actually had six panels, with an airplane and banner starting on the fourth panel and going off to the right, so we covered up the airplane with the “2012” sign and painted over the last two panels to use for our side wings.

The left side wing was painted simply with some rocks, ocean, and sky. We had paper surfboards left over from VBC, as well as a tall lifeguard chair from VBC, which we reused.

For the right wing, I painted ocean, sky, and a lighthouse. I used cardboard for the top part of the lighthouse and we jury-rigged it to the panels with an actual light that went around and around! We just happened to have those “siren” type lights in the attic — we pried off the red light cover and used yellow tissue paper in the window of the cardboard lighthouse top to help mute the effect. It really looked awesome!

Just cardboard wasn’t really providing enough support, so we added some random stakes that we found on-site for more support.

The right side of the room was decorated with the remaining paper surfboards and butcher paper palm trees that I cut out in advance and had volunteers put up.

We edged the ping pong table with a grass skirt (compliments of Oriental Trading Company).

A volunteer used my sketch to draw and cut out large hibiscus flowers and we put them up against the back wall.

On the left wall, we had the kitchen area edged in grass skirts, burlap netting, and lights. The sign was from VBC as well.

I worked on the entryway, cutting out waves from long rolls of butcher paper and pinning them to the wall. We had rather flimsy cardboard piers from VBC which we reused as well.

More grass skirts for the table and entryway!

The final touch was the annual balloon drop — except we used beach balls instead! (Sadly, the entire net came off the ceiling instead of opening up as it should have, so the effect was ruined.)

And another mishap was that the 2012 sign, made out of heavy cardboard, fell down and needed a bad duct-tape patch job.

One more mishap – although we tested all the Christmas lights in the morning when we were putting them up, by evening a whole strand had gone dark.

In another room, we set up a beach drink area with virgin margaritas and pina coladas, which were very popular!

Some of the leaders and volunteers came dressed for the theme, as well!

Activities that night included an outdoor fire pit for intimate hanging out (complete with s’mores components):

… and we spent the last several hours all together in the main room for the annual lip sync contest, a new “talentless contest,” and lots of games and prizes!

Those of you who have followed this blog for a while may remember the post I did a few years ago about the big New Year’s Eve event that my church puts on for junior high and high school students. We’ve continued to help out every year, and this year was the first time that I was officially in charge of decorations. With butcher paper, duct tape, push pins, cardboard, and a lot of help, we transformed one of the rooms at our church into Disneyland – or, “Bashland,” as we called it.

I’ve posted a few pictures below, but if you want to read all the details about the prep (with another post about the actual event to come), please head over to my personal blog for the full story!

The foyer, decorated as Main Street:

I painted the castle for the backdrop:

New Orleans Square/Pirates of the Caribbean:

Read more at my personal blog.