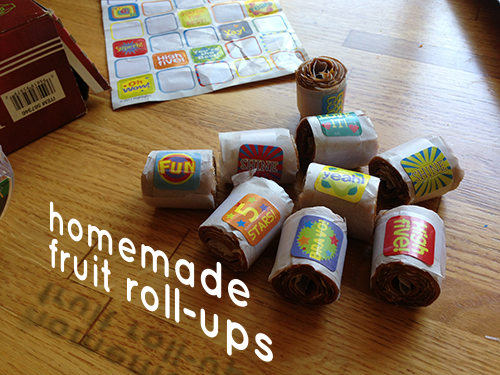 I tried making homemade fruit rollups with part of our first peach harvest!

There are several recipes out there, but I went with a simple no-fuss approach:

I ended up leaving the pan in there for half of the next day, too, because some parts were really thick and didn’t seem very dried out. Then I peeled it off.

Some parts stuck to the parchment.

I got a clean piece of parchment paper to roll up the fruit leather.

Then, I got a roll of scotch tape and stickers. I put the sticker UNDER the end of the tape.

Pulling out enough tape to wrap around the cylinder-of-fruit-leather, I stuck the other end of the tape to the parchment paper to go in the same direction as the “roll.” This way, when the sticker gets peeled off, the fruit rollup can unroll naturally. See picture below:

The tape has to be long enough to stick to itself, otherwise it will just fall off the parchment paper.

Then, using a pair of sturdy kitchen shears and brute force, I cut off the end to form a fruit-rollup-sized piece, while holding on tightly to the rest of the cylinder so that it didn’t unroll.

Ta-da! Store in an airtight container, although they won’t last that long. The kids love them; I personally would try extra-hard to spread everything evenly next time (the edges were more crispy than leathery) and perhaps add some honey to make it a little sweeter.

I was exploring ways to draw maps in Illustrator and ended up making a map of Davis and the top ten things our family likes to do together.