Rusty put the two versions of the logo that I had provided to a vote, getting feedback from everyone that he could. It was a really tough decision, because the girl looked more dynamic and interesting (especially to climbers), but some people (generally non-climbers) also said they thought she looked unstable and unsafe. Rusty wondered if I could edit the girl to have her foot up on the cliff, and I ended up trying and deleting some pretty awful attempts. Rather than admit to my mediocre figure drawing skills, I finally said that putting her foot up on the cliff would result in her back being straight or rounded, which would lose some of the curves that made the image look more dynamic to begin with. We had several skype conversations going back and forth on this, scouring the internet for examples of photos that looked dynamic-yet-stable, and then in the middle of that, Rusty sent me photos of the completed walls:

I tried something completely different, but Rusty didn’t love it (even when I suggested that we use rainbow colors to make it more exciting – maybe I should have suggested adding kittens!).

With the grand opening weeks away and signage yet to be ordered, Rusty pulled the trigger and picked the girl. I offered some color suggestions based on the red and blue color scheme they were using for their walls:

Rusty decided to use different colors depending on the application. He also asked me for a centered version, as well as a graphic with the tagline over the logo: 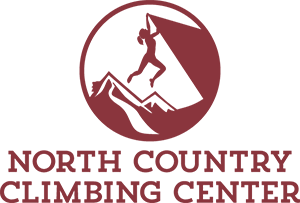 Then it was time to pull together the files for the t-shirts, sign, fliers, and all that good stuff.